Birthplace at Via XX Agosto

Luciani entered the minor seminary of Feltre in 1923, where his teachers found him "too lively", and later went on to the major seminary of Belluno. During his stay at Belluno, he attempted to join the Jesuits but was denied by the seminary's rector, Bishop Giosuè Cattarossi. Ordained a priest on 7 July 1935, Luciani then served as a curate in his native Forno de Canale before becoming a professor and the vice-rector of the Belluno seminary in 1937. Among the different subjects, he taught dogmatic and moral theology, canon law, and sacred art. 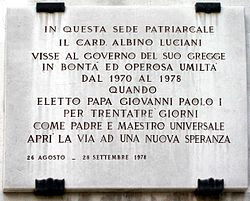 In 1947, he was named vicar general to Bishop Girolamo Bortignon, OFM Cap, of Belluno. Two years later, in 1949, he was placed in charge of diocesan catechetics.

On 15 December 1958, Luciani was appointed Bishop of Vittorio Veneto by Pope John XXIII. He received his episcopal consecration on the following 27 December from Pope John himself, with Bishops Bortignon and Gioacchino Muccin serving as co-consecrators. As a bishop, he participated in all the sessions of the Second Vatican Council (1962–1965).

On 15 December 1969, he was appointed Patriarch of Venice by Pope Paul VI and took possession of the archdiocese on 3 February 1970. Pope Paul created Luciani Cardinal-Priest of S. Marco in the consistory of 5 March 1973. Catholics were struck by his humility, a prime example being his embarrassment when Paul VI once removed his papal stole and put it on Patriarch Luciani. He recalls the occasion in his first Angelus thus:[4]

Luciani was elected on the fourth ballot of the August 1978 papal conclave. Senior Cardinal Deacon Pericle Felici announced that the Cardinals had elected Venice patriarch Albino Luciani to be Pope John Paul I.[5] After considering calling himself Pius XIII, he chose the regnal name of John Paul, the first double name in the history of the papacy, explaining in his Angelus that he took it as a thankful honour to his two immediate predecessors: John XXIII, who had named him a bishop, and Paul VI, who had named him Patriarch of Venice and a cardinal.[6] He was also the first (and so far only) pope to use "the first" in his regnal name.[7]

John Paul I pictured in a coin.

Observers have suggested that his selection was linked to the rumored divisions between rival camps within the College of Cardinals:[6]

Outside the Italians, who were experiencing diminished influence within the increasingly internationalist College of Cardinals, were figures like Cardinal Karol Wojtyła.[6] Over the days following the conclave, cardinals effectively declared that with general great joy they had elected "God's candidate".[6] Argentine Cardinal Eduardo Francisco Pironio stated that, "We were witnesses of a moral miracle."[6] And later, Mother Teresa commented: "He has been the greatest gift of God, a sunray of God's love shining in the darkness of the world."[6]

Metropolitan Nikodim (Rotov) of Leningrad, who was present at his installation, collapsed and died during the ceremony, and the new Pope prayed over him.[8]

After his election, John Paul quickly made several decisions that would "humanise" the office of pope, admitting publicly he had turned scarlet when Paul VI had named him the Patriarch of Venice. He was the first modern pope to speak in the singular form, using 'I' instead of the royal we, though the official records of his speeches were often rewritten in more formal style by traditionalist aides, who reinstated the royal we in press releases and in L'Osservatore Romano. He was the first to refuse the sedia gestatoria, until Vatican pressure convinced him of its need, in order to allow the faithful to see him.

He was the first pope to choose an "investiture" to commence his papacy rather than the traditional papal coronation.

One of his remarks, reported in the press, was that the Lord was not only the father, but also the mother.[9]

John Paul I intended to prepare an encyclical in order to confirm the lines of the Second Vatican Council ("an extraordinary long-range historical event and of growth for the Church," he said) and to enforce the Church's discipline in the life of priests and the faithful. In discipline, he was a reformist, instead, and was the author of initiatives such as the devolution of one per cent of each church's entries for the poor churches in the Third World. The visit of Jorge Rafael Videla, president of the Argentine junta, to the Vatican caused considerable controversy, especially when the Pope reminded Videla about human rights violations taking place in Argentina during the so-called Dirty War. 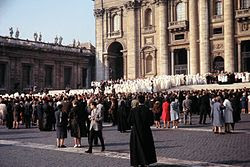 Opening of the Second Session of Vatican II

The moral theology of John Paul I has been described by some as being very liberal, to the extent that it might have stood a chance of reversing the Church's opposition to birth control if he had lived longer.[10]

He was regarded[who?] as a skilled communicator and writer, and has left behind some writings. His book Illustrissimi, written while he was a Cardinal, is a series of letters to a wide collection of historical and fictional persons. Among those still available are his letters to Jesus Christ,[11] the Biblical King David,[12] Figaro the Barber,[13] Marie Theresa of Austria[14] and Pinocchio.[15] Others 'written to' included Mark Twain, Charles Dickens and Christopher Marlowe.

John Paul impressed people with his personal warmth. There are reports that within the Vatican he was seen as an intellectual lightweight not up to the responsibilities of the papacy, although David Yallop ("In God's Name") says that this is the result of a whispering campaign by people in the Vatican who were opposed to Luciani's policies. In the words of John Cornwell, "they treated him with condescension"; one senior cleric discussing Luciani said "they have elected Peter Sellers."[16] Critics contrasted his sermons mentioning Pinocchio to the learned intellectual discourses of Pius XII or Paul VI. Visitors spoke of his isolation and loneliness, and the fact that he was the first pope in decades not to have had either a diplomatic role (like Pius XI and John XXIII) or Curial role (like Pius XII and Paul VI) in the Church.

His personal impact, however, was twofold: his image as a warm, gentle, kind man captivated the world. This image was immediately formed when he was presented to the crowd in St. Peter's Square following his election. The warmth of his presence made him a much-loved figure before he even spoke a word. The media in particular fell under his spell. He was a skilled orator. Whereas Pope Paul VI spoke as if delivering a doctoral thesis, John Paul I produced warmth, laughter, a 'feel-good factor,' and plenty of media-friendly sound bites.

John Paul was the first pope to admit that the prospect of the papacy had daunted him to the point that other cardinals had to encourage him to accept it. He strongly suggested to his aides and staff that he believed he was unfit to be pope.[citation needed] Though Pope Paul VI's Apostolic Constitution Romano Pontifici Eligendo explicitly required that John Paul be crowned, he controversially refused to have the millennium-old traditional Papal Coronation and wear the Papal Tiara.[17] He instead chose to have a simplified Papal Inauguration Mass. John Paul I used as his motto Humilitas. In his notable Angelus of 27 August delivered on the first day of his papacy, he impressed the world with his natural friendliness.[4] 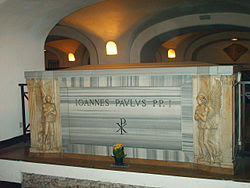 Tomb of John Paul I in the Vatican Grottoes

John Paul I was found dead sitting up in his bed shortly before dawn on 29 September 1978,[18] just 33 days into his papacy. The Vatican reported that the near-66-year-old Pope most likely died the previous night of a heart attack and altered some of the details of the discovery of the death to avoid possible unseemliness[19][20] in that he was discovered by Sister Vincenza, a nun.[21]

An autopsy was not performed. This, along with inconsistent statements made following the Pope's death led to a number of conspiracy theories concerning his death. These statements concern who found the Pope's body, at what time he was found, and what papers the Pope had in his hand. 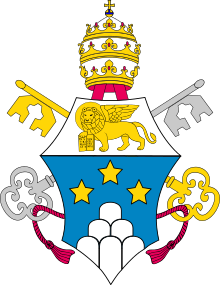 Papal Arms of John Paul I

Other than the abandonment of the Papal Coronation, John Paul I was not in office long enough to influence any major practical changes within the Vatican or the Roman Catholic Church.

The process of canonisation formally began in 1990 with the petition by 226 Brazilian bishops, including four cardinals.

On 26 August 2002, Bishop Vincenzo Savio announced the start of the preliminary phase to collect documents and testimonies necessary to start the process of canonisation. On 8 June 2003 the Congregation for the Causes of Saints gave its assent to the work. On 23 November, the process formally opened in the Cathedral Basilica of Belluno with Cardinal José Saraiva Martins in charge. [22][23]

The Diocesan inquiry subsequently concluded on 11 November 2006 at Belluno. In June 2009, the Vatican began the "Roman" phase of the beatification process for John Paul I, drawing upon the testimony of Giuseppe Denora di Altamura who claimed to have been cured of cancer. An official investigation into the alleged miracle is now under way.[24] For Luciani to be beatified the investigators have to certify at least one miracle. For canonization there must be two more.

John Paul II on his predecessor

Cardinal Karol Wojtyła was elected to succeed John Paul I as Supreme Pontiff on Monday, 16 October 1978. The next day he celebrated Mass together with the College of Cardinals in the Sistine Chapel. After the Mass, he delivered his first Urbi et Orbi (a traditional blessing) message, broadcast worldwide via radio. In it he pledged fidelity to the Second Vatican Council and paid tribute to his predecessor:[25]


This is the official website for Pope John Paul I

PILGRIM IMAGE OF MARY MEDIATRIX OF ALL GRACE